Ends in 5 days
9.2/10
Photos
Map
Please note: the sale information and the offer may have been updated after your reservation. The confirmation email is authoritative.
from 160€ per room*
up to
42%
274€
VeryChic Perks
Our price includes:
Our price does not include:
+- Price details

You may cancel your booking with a refund up to 7 days before arrival, without need for justification.*
Cancellations due to Covid-19 are possible up to the day of arrival, with …

A luxury hotel in the heart of Sicily’s countryside.

Exceptional
9.2 /10
> Customer reviews
By Amelia Peachment, VeryChic correspondent
Picture this - you’re sat overlooking the verdant Italian countryside, feet dangling in the azure infinity pool, sipping a cool glass of Sicilian wine as the aromas of oranges and lemons linger on the Mediterranean breeze. Sounds too good to be true, right? An intimate retreat nestled in eastern Sicily’s unspoilt landscape, boasting elegant rooms and the finest facilities, Kepos Etna Relais & SPA is simply heaven on earth!
Sometimes it’s hard to choose between a sea or nature holiday; whether to indulge in blissful beachcombing on a stretch of pristine coastline or to witness mother nature’s magic with a mountain ramble - fortunately, the luxurious Kepos Etna Relais & SPA gives you the option to do both. Nestled between the volcanic Mount Etna and Sicily’s azure coastline, the intimate retreat is holiday heaven!

To celebrate our anniversary my other half and I booked into Kepos Etna Relais & SPA for two blissful weeks, and I can safely say it was the holiday of a lifetime! Engulfed in a canvas of green the lavish hotel is set on a beautiful plot of land, in the small town of Santa Venerina, found in the metropolitan area of Catania.

Our day in paradise would commence, not with the usual head thumping alarm, but with the soft Sicilian sunlight filtering into our room; the natural, light colour palettes mean Kepos Etna Relais & SPA’s luxurious rooms blend seamlessly with their peaceful surroundings, whilst featuring chic design elements, sumptuous fabrics and contemporary décor they radiate an air of Zen.

After indulging in a rich breakfast buffet of delicious seasonal produce we would settle by the azure, outdoor infinity pool to bask in the Sicilian sun, taking in panoramic views of the charming countryside as if we were the kings of the castle; before heading to the spa to continue the relaxation. Home to a hot tub, sauna, Turkish bath, emotional shower and massage area, it is a microcosm of revitalisation.

Feeling suitably rejuvenated we would dine al fresco on the bucolic terrace, treating our taste buds to the finest local specialities all made with the freshest produce, discussing the following day’s plans; a trip up Mount Etna before an evening stroll on the stone beaches of Praiola, a mere ten-minute drive away from the serene retreat… unadulterated, Sicilian bliss!

Stay in a Superior Room for 2 people 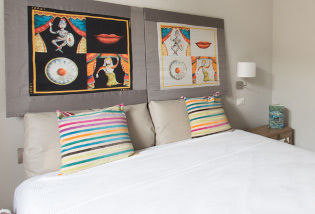 FROM THE AIRPORT TO THE HOTEL